The botanicals are macerated in a neutral grain spirit overnight at Alcohols LTD before being put through a run. The production lasts around nine hours, producing a concentrate that comes off the still at around 80% ABV. This is then blended with neutral spirit and cut down to its bottling strength of 40% ABV.

Tiger with a Roar – JJ Lawrence.

They experienced an not so smooth start in their career as First Spirit named as Tiger Gin was held in the court to be so similar to Tiger Beer, Heineken Asia Pacific PTE challenged the trademark. Lawrence is a determined man, though, and rather than discourage him, his fight with the big boys only spurred him on. As he says himself: “It became a matter of principle, it was long and drawn out but the fight in the tiger in me drove me on to win!”

Lawrence was always into Gin and knowing that he started researching and made his all focus on into his obsession of Gin. Lawrence made a traditional recipe and experimented with traditional recipes until he had a gin that he felt was sweet and smooth enough to go down easy when sipped over ice. 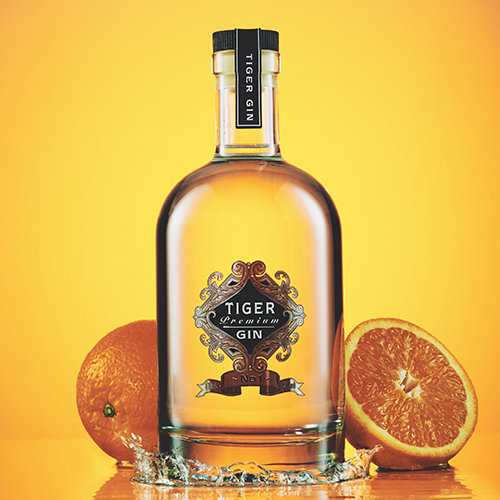 Tiger Gin has a complex formula that develops into an infusion that is smooth, well balanced and a very satisfying award-winning gin. Tiger Gin has been made using traditional method and recipes and proudly presents into their unique bottle with care and affection.

Tiger Gin is quite viscous, filling the mouth and cheeks with a rich, oily texture. Liquorice root has been used in abundance here – though sweetness, rather than an earthiness from the root takes hold.

Tiger is classically styled gin to taste, so much so that it comes across as a little bit timid in terms of a new addition to the category. Its decent gin, but we wonder if it actually offers anything new or worth swapping other wells, classic gin for.

In terms of services, the rich juniper means that this would work perfectly well in a classic G&T – add a wedge of lime and serve up with a standard tonic like Schweppes for a drink just like ma used to make.

In terms of a cocktail, the liquid makes for a lovely, traditional Martini. The luscious mouthfeel of Tiger Gin will shine in this environment, though its Old Tom tendencies mean it would also be at home in a modern interpretation of a Martinez. It’s a good gin, although a little too safe perhaps and a little too middle of the road for us to be really raving about it. Certainly, in terms of price, there are other gins who share similar easy sipping qualities for considerably less.

The reason that the brand will build up around a solid-liquid and in time, Lawrence may well be able to create a more complete package.

The tale of the underdog succeeding is always one the world wants to hear, and though the fight Tiger Gin faced at the very beginning may have been hard, it’s given the brand a clear message – one of gutsy determination and stubbornness – that suggests they’re in this for the long haul.

For - Awards visit here and here