Social Media such as Instagram have paved the way for many Mixologists to create and distribute their Crafted Cocktail recipes among the masses.

More than any other social media platform, Instagram is changing the world of craft cocktails. At one time, only celebrity bartenders and mixologists at cult speakeasies were creating new cocktails with exotic ingredients. But thanks to the democratizing power of social media, Instagram has emerged as the new place to find exciting new cocktail creations as well as important trends within the world of spirits and alcoholic beverages.

What sets these drinkstagrammers apart from other bartenders and sommeliers on Instagram is that they are self-proclaimed cocktail enthusiasts, making their creations primarily at home, where they relentlessly experiment to get all the ingredients exactly right. Moreover, you won’t always find them located in the classic “hotspots” for cocktails, such as New York or San Francisco. @BeautifulBooze, for example is based in North Carolina, while @Gastronomista_ is based in Colorado and @HighProofPreacher is based in Portland.

The rise of drinkstagrammers as social media influencers:

Yet, despite being based in diverse geographic locales, they are very much on the radar of craft spirits brands, restaurants, mixologists and the mainstream media. They are regularly mentioned on blogs, on social media and in magazines, and many of their stellar creations are adapted by brands for promoting their own spirits. Some are actually paid to create new recipes for brands and then feature these creations on Instagram. Elliott Clark, for example, recently featured a Biscoff Cookies Old Fashioned, created in partnership with - you guessed it – Biscoff Cookies. 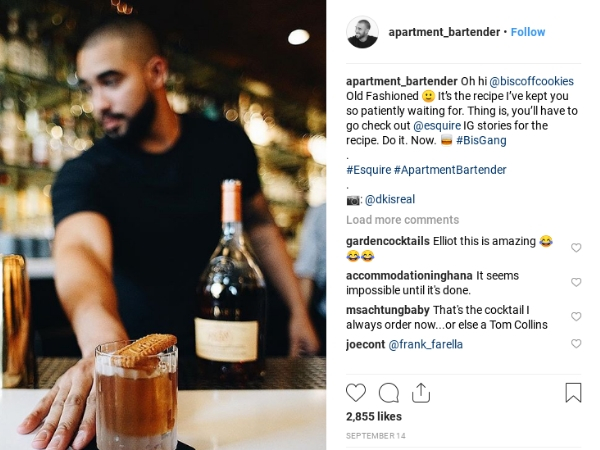 The Instagram post itself is a case study in itself of how to become a world-class drinkstagrammer. The caption to the post has a direct shout-out to the brand Biscoff Cookies. It includes an official Biscoff Cookies hashtag (#BisGang), an official hashtag for #ApartmentBartender, and an official hashtag for the media brand (#Esquire), which also featured the recipe on its own Instagram feed. The involvement of Esquire is key because @Esquire has 399,000 followers on Instagram. Thus, it’s possible to trace the amazing path of just a single post and how it went from what many might view as a niche Instagram account to mainstream popularity.

Not surprisingly, craft distillers are picking up on this idea and reaching out directly to these drinkstagrammers, offering them free products, free trips, and even cash payments. Some drinkstagrammers, in fact, have switched over from creating cocktail recipes on the side to becoming full-time content creators for liquor brands. It’s now very much par for the course to see bottles of specific spirits highlighted prominently in posts.

And, in fact, just about any product related to the world of alcohol beverages and bars can be highlighted in an Instagram post. For example, @BeautifulBooze recently highlighted a photo of a beautiful Paloma. While the cocktail was the clear star of the post, co-star billing certainly went to the leather cocktail apron provided by Lucio Tailoring Co.  In fact, @BeautifulBooze hosted an apron giveaway for her followers right within the Instagram post!

In some cases, craft cocktail trends can start completely organically on Instagram. Through a process of trial-and-error, a home cocktail enthusiast might stumble upon a great idea for a cocktail, post it on Instagram, and immediately generate strong word-of-mouth buzz on Instagram, as measured by likes and shares. 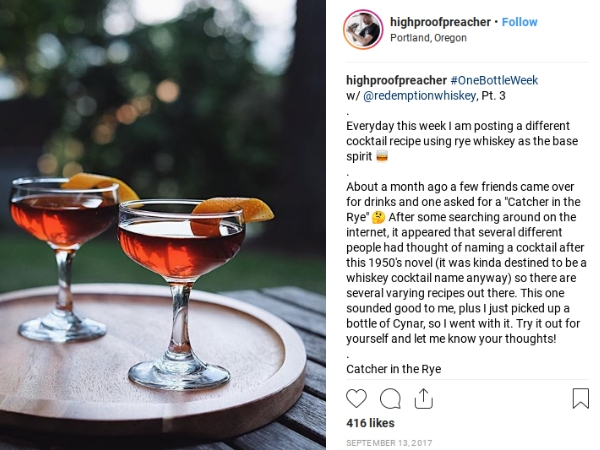 For example, Jordan Hughes of @HighProofPreacher regularly posts photos of rye whiskey cocktails. Since the base spirit is always rye whiskey, it was only a matter of time before some of his followers would ask him to create a Catcher in the Rye cocktail. That led to a period of research and experimentation, until deciding upon the perfect ingredients for a Catcher in the Rye cocktail worthy of the classic 1950’s book by J.D. Salinger.

While some craft cocktail trends do start organically on Instagram, without any push from a certain brand or influencer, it is now much more common to see specific hashtags used to create viral buzz around a certain spirit. One drinkstagrammer - @mmydrinks – has been particularly prominent in starting and launching new craft cocktail trends. One promotion was #CocktailRedux, which was used to encourage other Instagrammers to take a classic cocktail and then provide a clever twist on it.

Another promotion - #AmaroWeek – took on a life of its own, and now has its very own Instagram account, @AmaroWeek. The idea is simple but effective – invite fellow cocktail enthusiasts to come up with the most innovative cocktail possible with Amaro, and then hand out an award to the winner. As might be imagined, this has led to countless variations of the Negroni, as well as some cocktail creations that even uber-trendy mixologists at underground speakeasies do not know how to make. 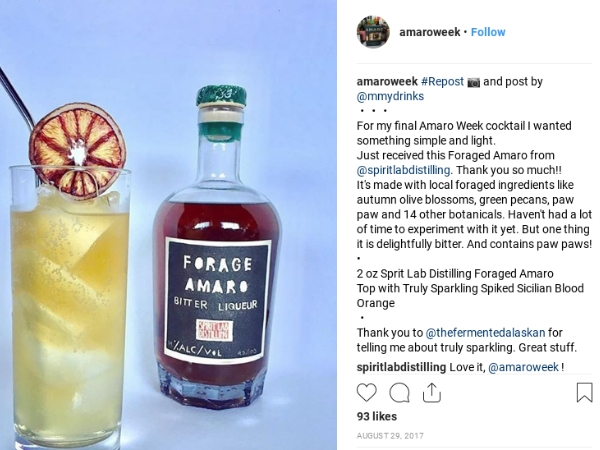 In fact, if anything, the rise of the drinkstagrammer has encouraged mixologists and bartenders to get into the game, launch their own Instagram accounts, and offer their own take on classic cocktails or devise entirely new creations. One of the most popular examples here is Kale and Cocktail (@KaleandCocktail), with nearly 2,500 followers.

One thing is clear – there is now a very vibrant ecosystem of cocktail enthusiasts on Instagram. At one time, it might have been the norm for a hot new cocktail trend to start in a city like New York, usually at a downtown cocktail lounge or speakeasy frequented by hipsters. But now the entire craft cocktail movement has been democratized. Anyone who has taken the equivalent of a Cocktail 101 class and knows how to take great photos can become an influencer. @Apartment_Bartender, for example, launched on Instagram in October 2015, and now has more than 55,000 followers.

That rapid rate of growth has certainly attracted the attention of America’s nearly 1,300 craft spirits producers, who see an entirely new way to get their craft spirits in front of influencers and tastemakers. Instead of trying to outspend the huge drinks conglomerates using traditional advertising, they now have a low-cost, highly effective way to go direct to consumer and build brand awareness using Instagram.