So the story of Bedlam Vodka started over 170 years ago in an Irish rural area called bedlam when ancestors of one of the founders were able to turn hardship into heaven amidst the Great Famine. They used to import rice available from France & by applying the traditional Irish distilling acumen refined over 7 centuries, the founders created a little Bedlam in their native land.

Everything about Bedlam Vodka is directed towards creating disruption in the spirits industry. From its unique grain & flavor - to its superbly crafted bottle & the very famous ‘Double Headed Raven’ logo. 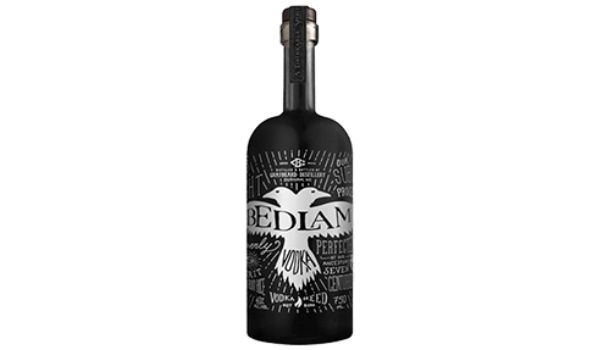 Bedlam Vodka is a clear, unaged spirit, light on the nose, and complex on the palate. It was traditionally distilled just for family, for weddings, for trade and barter. Then in the late 1800s, it was brought to the shores of America when the family immigrated & distilled again in response to prohibition & Great depression. And like many things are done as an act of rebellion, it passed into the family history as a story told from generation to generation.

Made from long-grain white rice sourced from Arkansas & Louisiana, Bedlam Vodka is naturally Gluten-free & always made grain-to-glass in our distillery in North Carolina. The team utilizes the most advanced distilling technology to blend the ancient with the current edge & produce a vodka that is unlike any you have ever had.

Bedlam Vodka is flavourful, smooth, and completely lacking in the antiseptic burn that you have been forced to suffer through from vodkas before. It is a vodka that you can match with your favorite mixer, or simply enjoy on its own.