The results for the 2022 Bartender Spirits Awards are out and we are delighted to announce that “Spirit of the Year” is awarded to Lyng Norwegian Botanical Gin.

Lyng Norwegian Botanical Gin is an award-winning gin and a nod to the great outdoors. Lyng contains the most Norwegian botanicals than any other gin. This Norwegian gin is inspired by the heather, a beautiful and tenacious shrub that thrives in the mountains and brightens up nature every autumn. To make the ultimate taste of wild and pure nature, 33 herbs, spices, and flowers are employed. heather, horseshoe, elderflower, birch leaves, roseroot, watercress, and some other plants were picked while walking in the highlands and forests. Fresh Norwegian junipers are included too. Perfect for cocktails and a Gin & Tonic. It is sophisticated and complex. 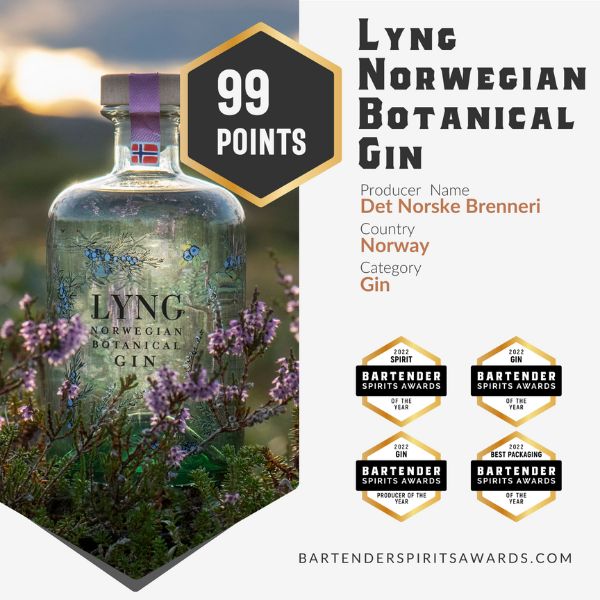 Det Norske Brenneri's story begins in 2011. Odd Johan Nelvik, the previous editor-in-chief of Se og Hør, and investor Kjetil Holta founded a company to create aquavit at the time, and it was a huge success. They take pride in the fact that they were the ones who broke the monopoly.

The aquavits Arvesølvet, Arvesølvet Helt Klar, Høvding and Hellstrøm are among Det Norske Brenneri's most well-known craft products, today. In 2012, Brenneri released Audny, Norway's first single malt whiskey. Eiktyrne, the sequel, was released in November 2015 and debuted a new Norwegian gin that year, made with Norwegian berries and herbs. Harahorn, a small-batch Norwegian gin, is a true artisan gin.

Here are the top winners of the 2022 Bartender Spirits Awards.